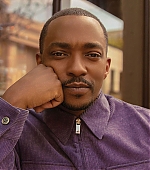 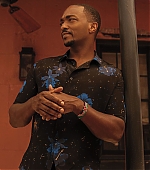 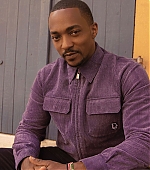 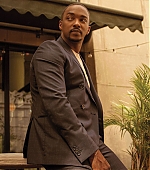 By the time Anthony Mackie calls me from New Orleans, I’ve already binged 8 Mile, The Hurt Locker, a handful of Avengers movies, and Mackie’s latest superhero performance, The Falcon and the Winter Soldier. I can’t see him (a Zoom is ideal for these sorts of things in pandemic times) but I don’t need to; I’d recognize his voice anywhere. “Coming from New Orleans, we don’t speak English like humans,” says Mackie, laughing and explaining why voice and speech training was especially challenging for him as an as­piring actor. “[But] when I got to Juilliard, I had this teacher named Denise Woods who made it very clear to me that I shouldn’t lose that spark, that New Orleans part of me.” Mackie seems to have taken Woods’s advice seriously. He isn’t calling from New Orleans because he decamped there to wait out the pandemic, but because it’s home. It’s here that Mackie is raising his four sons, and it’s here that he remains, Hollywood fame and all.

Mackie’s rise to stardom can’t be described with adjectives like “sudden” or “meteoric.” Instead, over the past 20-odd years, the 42-year-old actor has steadily accumulated credits in indie films and Hollywood blockbusters, on Broadway and off. He effortlessly slips from hero to villain, dramatist to action star, leading man to supporting actor. Onscreen, he’s played a U.S. Army sergeant, a boxer, Martin Luther King Jr., a drug dealer, an artist coming to grips with his sexuality, a rapper (twice), and one of the first Black bankers in U.S. history. In a recent interview with Variety, Mackie recounted a known joke in Hollywood: if you’re a white actor looking for an Oscar nomination, play opposite him. First, there was Eminem in 8 Mile in 2003 (Eminem won best original song for Lose Yourself). Then Ryan Gosling in Half Nelson in 2007. And then Jeremy Renner in The Hurt Locker in 2010.

The role of a lifetime, however, arrived in 2014, when Marvel cast Mackie as Sam Wilson a.k.a. Falcon, a U.S. Air Force veteran turned airborne superhero fitted with red-tinted goggles and a pair of mechanical wings. While Falcon has typically been found flanking Captain America or fighting as part of the Avengers’ ensemble cast, he levelled up to leading hero, alongside Winter Soldier (Sebastian Stan), earlier this year with the six-part The Falcon and the Winter Soldier. When the show — a more character-driven spin on the superhero format — debuted on Disney+ back in March, the streaming platform announced that it was the most watched premiere in its history.

Anthony Mackie was born in New Orleans in 1978, the youngest of six children. As a kid, he was rambunctious enough that his school principal recommended Ritalin. A perceptive teacher instead recommended a creative outlet for his excess energy. In second grade, Mackie made his onstage debut with a puppet play based on the song “Waltzing Matilda,” said to be Australia’s unofficial national anthem. What Mackie remembers is the standing ovation. “[It took] three curtain calls for a puppet play? From that moment on, I loved the idea of performing,” he says.

The theatre also proved to be a supportive home for an adolescent Mackie. “I always felt like I was at a disadvantage because of the race relations of things and the education system in New Orleans. I never felt adequate,” he says. “And then I read my first Shakespeare play. I got it. I felt informed. [That] this white dude could write a play 450 years ago that I could relate to today changed my perspective immensely.” Mackie began devouring the works of famous playwrights like Ibsen, Shaw, and Chekhov. He began listening to composers like Stravinsky and studying theatre practitioners like Meisner and Brecht. He even took clown classes and studied kabuki, a type of Japanese dance-theatre. “All these things just started falling into place,” he says. “I found myself in the theatre. I became the man I wanted to be in the theatre.” [more at Source]