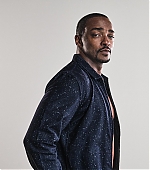 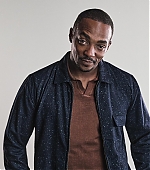 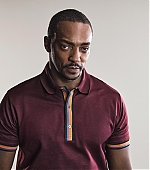 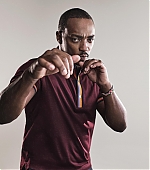 It was March 2014 when the cast of Captain America: The Winter Soldier assembled in London for the U.K. leg of their international press tour. For some, namely Chris Evans, Scarlett Johansson, and Samuel L. Jackson, this wasn’t their first rodeo with Marvel Studios. They knew their talking points and how to regale reporters at the press conference by swapping war stories and feeding off each other’s energy. Sebastian Stan, only on his second outing in the franchise, was more reserved. He offered warm smiles and laughed along with the group’s jokes, but kept his own responses somewhat brief. When asked about any on-set injuries that might have incurred, he said. “I honestly wouldn’t feel anything until I was in the car on the way home, when I couldn’t get out of the seat. But I’m sure we hurt each other.”
On his left, Anthony Mackie chimed in. “You didn’t hurt me,” he said in a soft, almost amorous tone as they locked eyes. This made the audience chuckle. Stan livened up, volleying back what Mackie served. “You?! This is the first time I’m seeing you,” he joked.

Mackie had inadvertently solved a small problem for the Disney publicists managing that tour. “They were worried that I didn’t talk a lot. I get very uncomfortable,” Stan admits to EW, Zooming in from Vancouver for a chat with his New Orleans-based costar this past January. “They’re like, ‘Just put him in with Anthony, okay? They’re going to talk.’ And I was talking!” he says. “By the end, I was very lively, and it really is thanks to him.”

Stan can’t help but smile. “Way to put a button on it, and then some!”

Whatever the special sauce, it’s this playful dynamic between the actors that made Marvel want to center them in their own event series, The Falcon and the Winter Soldier. Premiering this Friday on Disney+ following the successful debut of WandaVision, the show sees Captain America’s two best mates — wise-cracking pararescue Sam Wilson (Mackie) and genetically enhanced super-soldier from World War II Bucky Barnes (Stan) — stomach each other long enough to face a global crisis involving a masked militia group and one Helmut Zemo (Daniel Brühl), the big bad from 2016’s Captain America: Civil War. As it happens, head writer Malcolm Spellman points to a scene from that film as “the moment this show was born.” Fans know it well: a cramped Bucky in the back of an old Volkswagen Beetle asking Sam, “Can you move your seat up?” Kevin Feige, president of Marvel Studios, also looks to the duo’s battle with Spider-Man later in Civil War, which offered an opportunity for more banter. “They’re so funny,” Feige says. “Those are the two moments that we [at Marvel Studios] would watch and go, ‘I want to watch that! I want to watch them together more!'” [More at Source]